Your electronic I-94, Travel History could be full of errors 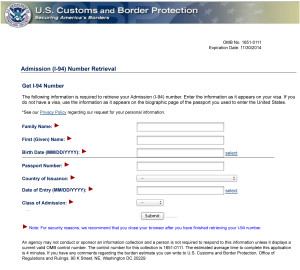 Screenshot of Online I-94 Retrieval Form

While you no longer have to worry about replacing a lost or damaged paper I-94, you still have to make sure CBP is doing its job. And you need to worry about more than just your I-94; you also need to make sure that your travel history log is complete and correct!

Recently I had a client go through what I will call ‘the CBP Nightmare.’ Multiple lessons were learned in the process but they all boil down to this: don’t assume CBP is doing their job right.

It all began with the officer who stamped my client’s passport at the port of entry. According to the stamp, he was approved for a 7-month stay on a B2 visa. The client, having flown multiple times on a B2 since he was a child, concluded this was just a discretionary grant and left it at that.

When my client had a little less than a month of authorized stay (based on the passport stamp), he went online and checked his I-94. The first mistake he saw was the ‘Most Recent Date of Entry.’ The date shown was from 5 trips ago; that is, my client had flown in and out of the U.S. on his B2 five times after the date that was shown! After looking at the Travel History, it was confirmed that CBP had failed to enter my client’s last five entries. This lead to the next mistake: according to the ‘Admit Until Date,’ my client was out of status!

And now, the next episode of the CBP Nightmare: Deferred Inspection.

I have now shown up with my client at the CBP Deferred Inspection Office in Chicago, a small and empty waiting room with a service window. The officer shows up–you have to ring a bell so that an officer will show up at the window–and, without giving us an opportunity to explain why we are there, she immediately tells us that they are no longer giving out paper I-94s and that we need to go online to print them out. Ok, good to know. I handed the officer a full set of copies of my client’s passport, as well as the passport, and printouts of the I-94 and Travel History. I offered the itineraries for all five trips after the one shown in the record, and explained that the last trip that was booked was changed and that my client did not leave the country as scheduled. The officer refused to even look at the itineraries, then she disappeared with passport and copies. We were eventually given back our documents and an updated printout of just the I-94. To our horror, the I-94 indicated that my client was authorized for the standard 6-month period and that he had fallen out of status just a few of days before, which was inconsistent with the information on the passport stamp. We pointed this out to the officer. The officer called her supervisor, and the supervisor instructed the officer to manually correct the stamp on the passport, writing in the previous month, and placing the mark “CWOP” (cancelled without prejudice). They shrugged their shoulders and told us to talk out the rest with CIS. Without prejudice indeed…

But it gets worse. When we get back to the office and check the Travel History, the record shows that my client left the country when he actually didn’t. Apparently, CBP taps only into airlines’ booking records, rather than their boarding records. Then I look through the passport copies that were handed back to me. They kept the page with the original passport stamp! Thankfully, I had made another copy for my records.

Based on the above experience, I have come up with the following:

Tips for the Travelling Nonimmigrant

Ms. Rodríguez’s interest in serving immigrant communities began with her experience as a member of the Puerto Rican diaspora. As a law student, her culture and language allowed her to easily connect with Spanish-speaking immigrants. During her years in law school and upon graduation, Ms. Rodríguez had the honor and privilege of working on behalf of farmworkers, detainees, families, and individuals who were in need of her legal assistance.