Immigration reform in unexpected places: Will DREAMers get a path to citizenship by being able to enlist in the military?

On April 10, 2014 the American Immigration Lawyers’ Association (AILA) held its annual National Day of Action (NDA) where AILA members meet with their respective representatives to discuss immigration issues. During last year’s NDA, the focus was on getting an immigration reform bill passed in the Senate. Thankfully, the Senate acted but unfortunately we still do not have a bill that has passed the House of Representatives.

Nancy and Andrea visited with our respective representatives from Illinois and Virginia. This year, the focus of NDA was to gather information from our Congressmen about what the misgivings were on immigration reform and also to bring attention to the inequities of our current broken immigration system. 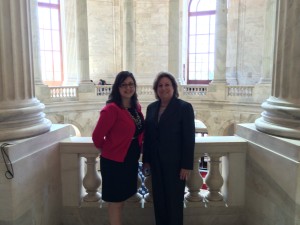 Andrea and Nancy in the Rayburn Building

During our visits we stressed the fact that even though we might not be able to get comprehensive immigration reform, there is much that the House can do to improve the immigration system we have in place, as well as addressing immigration issues in upcoming appropriations and DHS bills. Here is a link to the information brochure prepared by AILA regarding immigration reform: http://www.aila.org/content/default.aspx?docid=48032.

Since April there has been a lot of buzz in the media about immigration reform.  We hear a lot about how the House Republicans don’t want to pass immigration reform because they are not confident that President Obama would enforce the laws as they are written. We also hear that the White House is threatening to take up the issue of immigration reform on its own if the House doesn’t act soon. Unfortunately this type of uncompromising approach does not yield results. Because “comprehensive immigration reform” appears to be such a divisive topic, we have to find other ways through other laws to give our immigrant community the opportunity to get legal status.

In this vein, there has been movement in Congress to allow immigrants who were brought here as children to enlist in the military and gain permanent residence through their service. The ENLIST Act (H.R. 2377) is being offered by Republican Representative Jeff Denham (CA) as an amendment to the must pass National Defense Authorization Act (NDAA). Even House Speaker John Boehner has stated that they might be able to get a standalone vote on the Enlist Act instead of taking it up as an amendment to the NDAA.  Also this week, Senator Dick Durbin hosted a field hearing in Chicago on immigrant enlistment in the military.  Witnesses included Rep. Gutierrez (D-IL), AILA Advocacy Director Greg Chen, members of the military, and two undocumented cadets from the Phoenix Military Academy.  If the ENLIST Act were to pass, this could mean a path to citizenship to a whole host of immigrants who had no such hopes before.

Even though change may not be coming in the form that we envisioned, we must never give up the good fight. As this latest turn in immigration reform has shown, the change can come from some of the most unexpected places.